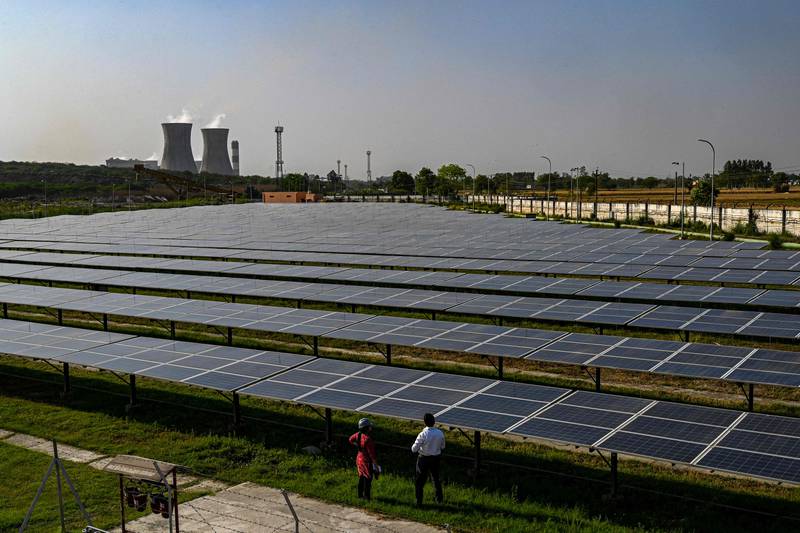 India is turning its attention to green hydrogen as a cleaner form of energy, as it continues to explore options to reduce dependence on imported and highly polluting fossil fuels.

But before green hydrogen can diversify the country’s energy mix, the country must generate enough renewable energy to produce the fuel, invest in hydrogen infrastructure, secure green financing and ensure the hydrogen economy is financially viable.

The potential is enormous, but analysts say the road is long and fraught with challenges.

“India is likely to witness an exceptional growth of green hydrogen usage and it is envisaged that hydrogen will occupy a major portion of Indian energy solutions, which effectively address country’s energy security,” says Manish Dabkara, chairman and chief executive of EKI Energy Services, a sustainability and climate change consultancy.

“Given that green hydrogen is a highly reactive fuel, its storage and transportation will require technology innovation and flow of green finance,” he says.

India, the world’s third-largest consumer of energy, is keen to reduce its reliance on fossil fuels, which are costly for the country both financially and environmentally.

They have inflated its import bill and play a major role in some Indian cities’ ranking among the most polluted in the world.

With the demand for energy only set to rise as India’s economy expands, it is all the more critical for the country to scale up its production of green energy and clean fuels.

“Green hydrogen is one of the cleanest energy vectors ,and its use would make India reach its emission targets much faster than relying only on alternative fuels like ethanol, or biofuels, or electricity stored in batteries,” says Ashwini Kumar, a lawyer and climate advocate who consults on industry decarbonisation.

Analysts say Russia’s war in Ukraine, which has rocked global oil markets, has only highlighted the urgency for India’s need to diversify its energy mix. Crude, which touched a 14-year high of almost $140 per barrel last month, has given up some gains but it is still more than 32 per cent higher than it was at the start of this year.

“Green hydrogen is an emerging option that will help reduce India’s vulnerability to such price shocks,” says Amit Bhandari, senior fellow for energy, investment and connectivity at Gateway House, a foreign policy think tank in Mumbai.

This year, the Indian government has started to introduce its national green hydrogen mission, which was announced by Prime Minister Narendra Modi last year with the ambitious aim of ultimately making “India a global hub for green hydrogen production and export”.

In February, the country’s power ministry said it planned to produce five million tonnes of green hydrogen a year by 2030. Currently, green hydrogen is not generated on a commercial scale in India.

“India really wants to be self-sufficient from an energy perspective … they want to reduce crude imports, they want to contribute towards climate mitigation goals,” says Gaurav Kedia, chairman of the Indian Biogas Association.

“Green hydrogen fits very well” in the government strategy, because “it’s clean and this can be easily accessible”, he says.

Green hydrogen is produced by using renewable energy to generate hydrogen through the electrolysis of water.

It can be used to decarbonise sectors that are considered hard to clean up, such as steel and transportation. Green hydrogen can also be used as a means of storing power generated from renewable sources including wind or solar, which might otherwise be wasted.

The International Energy Agency forecasts that the country will make up the biggest share of energy demand growth over the next two decades, as its energy consumption is expected to almost double.

New Delhi has also made global commitments under the Paris climate change agreement and at Cop26 to reduce its carbon emissions. India aims to be carbon neutral by 2070 and green hydrogen could help to achieve these targets, industry experts say.

“It is one of the cleanest energy sources,” says Louis Strydom, director for projects and market development, Middle East and South Asia at Wartsila Energy, which is working on the adoption of hydrogen and ammonia as viable engine fuels through advanced testing at its labs in Finland.

“Green hydrogen is already showing massive potential as a fuel molecule in manufacturing, transportation and other heavy industrial activities. It produces a minimal carbon footprint since its by-product is water.”

Green hydrogen “can become a critical cornerstone of a decarbonisation strategy” in India, he says. Most of the hydrogen that is currently being used globally is grey hydrogen, which is extracted from fossil fuels in a process. Almost all the hydrogen produced in India is grey.

India aims for close to 80 percent of its hydrogen to be green by 2050.

The country has outlined plans to encourage production by setting up separate manufacturing zones and offering incentives for electrolyzer assembly and manufacturing. It has also pledged to waive interstate power transmission fees for 25 years and provide priority connectivity to electricity grids to green hydrogen producers.

With incentives aplenty, some of India’s biggest companies are already joining the government’s green hydrogen push.

Their role will be essential in bringing in investment and lowering costs of green hydrogen production, the two main hurdles India needs to tackle to achieve its policy ambitions.

“Apart from government-backed players, the hydrogen economy will need private-sector participation,” says Mr Bhandari. “The government’s green hydrogen policy sends the right signals about its intent. It now needs to ensure that investment can freely come into this space.”

Reliance Industries, an oil-focused conglomerate controlled by India’s richest man, Mukesh Ambani, is working on bringing down the cost of green hydrogen to $1 per kilogram within a decade, which is about one-fifth of its current average rate.

Gujarat-based multinational Adani Group is also working on green hydrogen projects and has outlined ambitions to become one of the world’s largest producers.

“India plans to rapidly march ahead in its decarbonisation efforts and production of green hydrogen is key in this endeavour,” said S N Subrahmanyan, chief executive and managing director at L&T.

The JV “will focus on developing green hydrogen projects in a time-bound manner” to supply the fuel on an industrial scale, he said.

Hydrogen is largely used in the refining, steel and fertiliser sectors, and these are the areas on which the JV will focus initially, the companies said in a statement at the time.

To address a major gap in the country’s green hydrogen manufacturing capacity, IndianOil and L&T said they were also teaming up to manufacture and sell electrolysers, which are essential to produce green hydrogen.

“The green hydrogen sector is relatively new as compared to other energy sources,” says Mr Strydom.

“To make such a dramatic shift in your energy mix requires active co-ordination of investment and policy. Scale is a crucial factor, and to achieve that, private-sector investment and government policy and support will have to march in lockstep to reach feasibility.”

As well as electrolysers, the generation of green hydrogen requires clean water and green electricity for the electrolysis process.

But renewable electricity for the production of green hydrogen is the “main challenge for a country like India, which is facing an extremely high demand for electricity without adequate supply”, Mr Kumar says.

“India cannot afford to divert its electricity for the production of green hydrogen unless the electricity generated is in excess of demand.”

The government’s commitment to a greener future, however, was highlighted last month when transport minister Nitin Gadkari arrived at parliament in a green hydrogen-powered car, demonstrating that the fuel could have a role to play in India’s drive to increase the usage of greener vehicles.

There is still a long road ahead, but India has an enormous opportunity when its comes to green hydrogen, analysts say.

“India will need to develop cost effective solutions for the storage and transportation of green hydrogen to increase its scalability, which can otherwise limit the growth of the hydrogen economy in the country,” says Mr Dabkara.

If these, along with the other challenges, are “effectively addressed, this will be a boon for India’s quest to decarbonise its development”, he says.