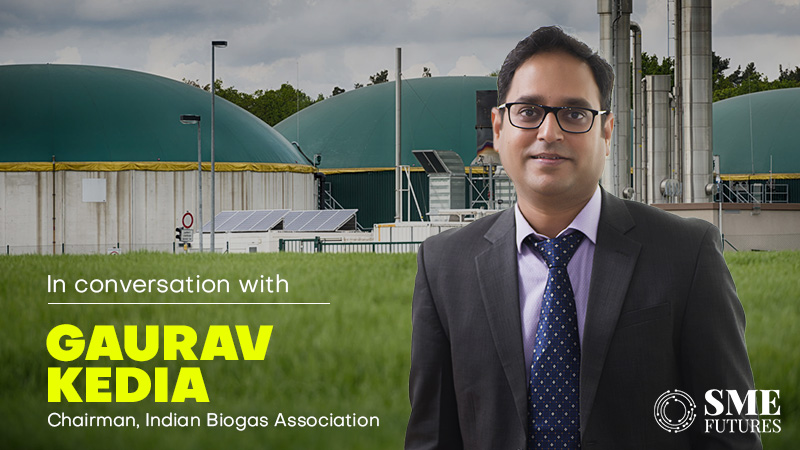 This sector has benefitted from the government’s announcement of a green hydrogen policy. India currently produces approximately 6.7 MT of hydrogen, primarily through natural gas steam reforming, and has set itself the ambitious target of producing 5 MMT of hydrogen per year.

India is rapidly approaching its net-zero targets, prompting the deployment of green hydrogen as a clean energy solution in mobility, industry, and power. At the same time, the NITI Aayog has launched a report emphasising the importance of green hydrogen, outlining a path to accelerate the emergence of a green hydrogen economy, which is critical for India to meet its net-zero ambitions by 2070.

Minister of Petroleum and Natural Gas, Hardeep Puri describing the green hydrogen as the fuel of future emphasised on accelerated timeframe for the sector. According to him, green hydrogen will overcome the challenges that were faced by the fossil fuel industry. And it will provide momentum to India’s journey towards energy independence by 2047. “We are spending Rs. 12 lakh crores to import the energy. So, we have to push the green hydrogen as an alternative source of energy. India has a huge edge in green hydrogen production, owing to its favourable geographic conditions and presence of abundant natural elements.”

However, green hydrogen deployment is not as simple as it appears. Also, the participation of MSMEs as stakeholders in this initiative seems far-fetched. SME Futures spoke with Gaurav Kumar Kedia, Chairman of the Indian Biogas Association, to get a better understanding of the sector, its current state and its challenges, while also trying to understand why the MSMEs are lagging in this sector.

India currently produces around 6.7 MT of hydrogen, mostly from the steam reforming of natural gas. With the launch of the National Hydrogen Mission on our 75th Independence Day by the Hon’ble Prime Minister Shri Narendra Modi, India has announced an ambitious target of producing 5 MMT of hydrogen per annum. The MNRE has also announced a series of lucrative policies for realizing this goal.

India is being strongly encouraged by the government to become a leader in green hydrogen. It will eliminate interstate transmission fees for the renewable energy that is used to produce green hydrogen and provide free storage for its excess production for up to 30 days. Additionally, producers will be permitted to build bunkers close to ports for storage and export. The government is also taking into consideration the producer’s subsidies in the second phase of the policy, as well as looking into the requirements for the refineries and the fertiliser factories to use green hydrogen.
What’s the current investment scenario in this sector following the government’s announcement on the green hydrogen policy and the COP26 targets?

The investment scenario is still not clear, but companies like Reliance, Adani, L&T, TATA, and others have plans in place to develop renewable energy and produce green hydrogen. IOC, BPCL, GAIL, HPCL and OIL are setting up green hydrogen plants to meet the clean energy requirements of the nation. 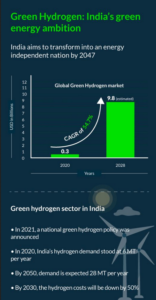 Do you feel that these targets are achievable in the said timeline? What are the government and private sector doing and what more can be done?

The targets are aggressive and must be dealt with by doing a lot of investments. To begin with, it is expensive to produce green hydrogen. While electrolysis is simple to execute in the lab context, it requires a substantial amount of investment to produce industrial amounts of green hydrogen. The International Energy Agency estimates that the current cost of creating 1 kilogram of green hydrogen ranges from US$3 to US$7. With natural gas, the cost of creating the same amount of hydrogen ranges from US$0.7 to US$1.6, and coal can cost as much as US$2.5 per kilogram. The US$2 threshold is viewed as a turning point for the global adoption of green hydrogen. By 2030, Mukesh Ambani promises to deliver it for US$1 per kg. Just the production costs are included here. The lightest gas, hydrogen needs to be compressed, combined with natural gas, or turned into a liquid before being transported. This will raise the prices. Additionally, there are many expenses that are related to using green hydrogen in manufacturing processes.

Across Indian industry, there are considerable efforts to establish a hydrogen economy in India, especially the work being taken forward by Indian Oil. Despite these positive moves from the government and industry, the current activity in this regard is still on an order of magnitude below where it needs to be to fully take advantage of a transition to hydrogen technologies, with the manufacturing being centred in India. In terms of the investment requirements, if India is to deploy green hydrogen as a clean energy solution for key sectors like transport, industry and power by 2050, it would require a significant amount of investment in electrolysers. Beyond this, additional investment in renewable electricity would be required, at a time when other demands for electricity in India will still be growing rapidly. This would clearly be a challenge to deliver, which is why India must begin now in scaling-up the activity regarding the same.
What are the challenges that the green hydrogen sector is facing?

Currently, the electrolysers (battery-like devices that split water into hydrogen and oxygen using electricity) use up about 40-50 units of electricity to produce hydrogen that is equivalent to 30-35 units. Therefore, the process is consuming more energy than it is producing. Plus, the electrolysers are quite expensive, thereby increasing the overall project and product costs. With companies like RIL getting into electrolyser manufacturing, we can expect cost reductions in the coming years.

Lowering the cost of production of green hydrogen is not the only challenge in the green hydrogen industry, but undoubtedly the most important right now. Green hydrogen will need to find applications even if cost parity is attained. Not all use cases will succeed, either. According to several reports, many industries that now use hydrogen, like the fertiliser, oil refining, and petrochemical industries, will migrate quickly because there is no other option. Since there are cheaper alternatives like biogas, its success in the long-haul transportation sector will remain limited. The production of steel and cement, two of the biggest sources of emissions, is another interesting use scenario. However, there hasn’t been much evidence of harnessing green hydrogen to produce these in the actual world.
Why are the SMEs hesitant to jump into this sector? Are there any government incentives or subsidies for this sector? Also, can we expect a PLI scheme for this sector?

High capital cost is the reason for the SMEs not being stakeholders in this sector.

While the hydrogen plant is not that costly, the renewable energy required to produce green hydrogen is not cheap and the project can only be feasible if the renewable energy is being prepared by the project developer itself. This significantly adds to the cost of hydrogen production as the required capacity plants will be expensive. This is a significant hurdle for the SMEs when they want to enter this market. Also, hydrogen being explosive in nature will require various security measures, making it difficult for an SME to adhere to all the safety norms due to financial constraints.
What is the future of the green hydrogen sector in India and what does it need to do?

For India to guarantee its role as a technology leader in the next phase of energy transition, it will need to greatly increase its activity across the public and private sectors to develop a hydrogen economy. India should focus public money on R&D and technology development to try and be on the global frontier in every part of the value chain of green hydrogen, with the objective of lowering costs and increasing deployment. This requires a coordinated push from the supply-side, with increased investment and R&D commitments by government and industry, as well as demand-side support in the form of guaranteed markets, enabled by government procurement, subsidy schemes or regulations/standards on fossil fuel alternatives. To ensure success, significant commitments under a National Mission, along with effective public-private partnerships, are required; there would be little point in a sub-optimal effort that fails to mobilise sufficient resources.

This is an opportunity for India to expand on the successes that it has achieved in the defence and pharmaceutical sectors, and to commit strategic resources to deliver breakthroughs for hydrogen technologies, yielding significant benefits for the Indian economy. Whilst it is important that India pushes ahead with developing and manufacturing hydrogen technologies domestically, it will also be important for other countries to do the same. Only through the mass manufacture and deployment of hydrogen technologies at scale will we see cost reductions where hydrogen can start to replace significant amounts of fossil fuel use, without any government subsidy.

It is however possible that these costs could reach parity in the future, with green hydrogen undercutting grey hydrogen in the favourable regions. This is made more possible in India, where renewable electricity tariffs are already among the lowest in the world and supplies of natural gas are limited and costly. Along with electricity prices, the other important factor for reducing the cost of green hydrogen is the capital cost of electrolysers. These are expected to continue to fall with a scale-up in deployment, as most electrolysers today are manufactured on a relatively small scale (BNEF, 2019).